I’m not in a good mood this morning cunts. So I thought this was a good time to write about my recent run to Brighton from London.

This post is dedicated to Dave Voutila and Alf Fireplace who I still owe copies of Angry Jogger to. I haven’t had the time to post these recently guys. I’m sorry. You will get your books. I am a man of my word. I’m just a bit of a doss cunt at the moment.

You should see how chaffed my nipples and bingo wings are at the moment. I’d take a picture of them, but I don’t want to be disowned by my family.

What can I say? I started the run. I wore my toilet paper as a hat. I ran through Kingston Upon Thames and the other posh parts of London.

Unlike last time at the London 2 Brighton 100km I didn’t have to camp before the run. Instead I went to bed at 7pm the night before and got an Uber to the start line. I regretted this as the Uber driver was a right chatty cunt and he honestly wouldn’t shut the fuck up.

Next time a driver asks what I do for a living I’m gonna say “I murder cats and kittens.”

I took part in my first ever Park Run through this section. It was in Nonsuch Park and I was running against the flow. As I was jogging through the park I was told by the marshall that a Park Run was coming through and to move onto the grass. I complied reluctantly. I was running against a politically correct stampede of a full cross-section of London society. Sikhs, Christians, Muslims, Mothers wheeling babies in their buggies like police with battering rams at drug doors.

I can’t remember any of this stretch really other than this.

From Oakes Park we ran down to a farm just past the M25. It’s here that things got a little tricky. We had to climb over our first stiles. We had to jog to the top of part of the North Downs and then back down again. The downhill part was the worst as it’s reasonably steep and difficult to get to grips with.

I made it easily but it was beginning to get a little hot for my liking.

The first bit of this run was through farmland and that meant climbing over a lot of stiles and through a lot of uneven land. It didn’t continue on for long. We soon hit a country lane that winded through a forest and it was through here that I broke back into my flow.

The final stretch to the half way point was a killer. It’s almost all hill up to the rest stop at Tully’s Farm but I didn’t stop to walk once. I broke through ahead of schedule.

I got into such an amazing rhythm during this part of the course. I was still taking on all of the uphills and got into this pattern where I’d overtake this other guy on the uphill parts and he’d then take me on the downhills. It didn’t matter to me. Whenever I saw him ahead of me I knew it meant more downhills.

That’s the good thing about ultra marathons. There isn’t really any cynical competition like in marathons or other shorter distance races. Everything is good natured as we know the torture that lies ahead of us all.

I stopped and had a cup cake at the 67k rest stop and then called my Mother who seemed to be less interested in far I’d ran and more interested in what I’d had ‘for dinner’.

A fucking cup cake ma. No. Not chips. We can’t be having potatoes for every single fucking meal. This is not the old country.

It was difficult to start running again but once I got going I was OK up until around 74k. This is where I had great trouble last time around. At Scaynes Hill things got muddy and I started to think back to my aborted Green Man Ultra attempt. I got stuck in the mud several times and was losing my cool. People were asking me if I was OK and I just wanted to tell everyone to fuck off as I’ve had to rely on my independence to survive for so long now and I hate feeling weak and backed into a corner.

I carried on but by 79km I was dry heaving and I couldn’t run anymore. I began to feel like a failure. Instead of thinking about the first 47 miles I’d ran, I concentrated on the last 1km I didn’t run.

It’s difficult to get perspective sometimes when you’re on your own but I somehow made it through to 80km.

I met Patrick from Waterford at the 80km rest stop and chatting with him helped bring me out of the hole. He brought me over 3 gels that I ate all at once. I’ve tried this before, I know. I almost shit myself with this tactic during my first 50k. But I was desperate and luckily the gamble paid off.

More importantly I was able to run again for the next 5 miles and the sickness disappeared altogether. I proved to myself once again that I could persevere through a crisis.

I refused to sit down at the penultimate rest stop. Instead I carried on up towards Ditchling Beacon. The hill was an absolute cunt. There was no way on earth that I could’ve ran up it so instead I power walked up it. 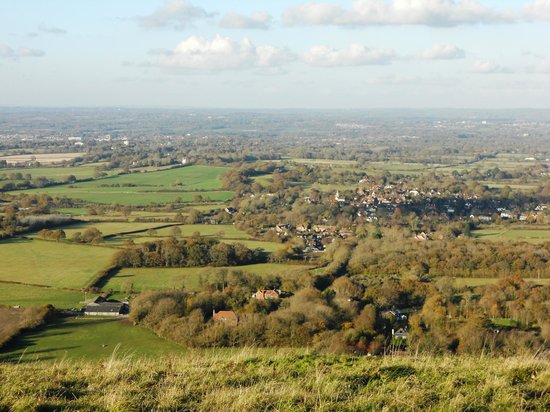 At the top I broke back into a really poor impression of a jog. My head torch was still slapping against my head, so I took it off and used it as a hand torch and it was great. I could see the grass path that lay ahead of me and focused on just moving forward steadily. Up at the top of that hill I could see the Milky Way above me and the lights of Brighton and Falmer below. I couldn’t think. I just jogged. Slowly. Steadily. Slowly. Steadily.

I stopped for a little bit at 94km and got a foil blanket as it was beginning to get cold. I started to do a Dalek impersonation again but this time I was jogging and it honestly felt like a fucking cape to me. I used it to steer me home all the way to Brighton Racecourse and only stopped to walk 3 times during the final bit.

I finished the fucking thing! In 17 hours, 33 minutes and 1 second. I spent the next half hour wandering around the main hall of the racecourse like a wounded animal. It hurt so much to even think.

I even refused the free glass of cava at the end of the event. Part of me thought “Yes! I’ve earned this glass!” but that’s bullshit. If anything I’ve earned the right to live a life free from the alcohol trap.

Eventually I summoned the strength to call a taxi to bring me to my hotel for the night.

I didn’t sleep at all due my legs cramping. Now I’m thinking about entering the London 2 Cambridge event in a month. Jesus.