This will serve as the home of all of my posts related to marathon and half marathon training.

Expect to read a lot of cursing and whining about how I did not run as far as I wanted today.

If I'm training for a marathon I try to train for 18 weeks but 16 suffices. Nowadays I aim for at least 30 miles a week and run at least 4 times a week. I still have problems with my long run on the weekend. I tend to tense up when I think of the distance I've yet to cover. It's getting easier over time and eventually I hope to master it.

At my peak I try to run at least 50 miles in a week and go for between 18 and 20 miles as my longest single run. I find maintaining weekly mileage the easiest part of my routine. It's getting in enough long runs that I've had trouble with over the years.

I try to keep myself in good enough physical condition that I can run a half marathon given a month's notice. If I'm training for a marathon, I'm always happy to trade in one of my long runs for a half. If I'm not training for anything in particular then I gradually ramp up my mileage from 6 miles to between 10-12 at the weekend.

Running outdoors can be quite hazardous if you aren't acquainted with it. Here are a few things I've learnt from the time I've spent jogging in the great outdoors

My Half Marathon Pace

If you are running your first half marathon, then you'll have an idea of what time you're capable of in the event itself, going by your training run pace.

If I have enough left in the last 5k I'll push and aim to run it in under 30 minutes. This will typically leave me in with a sub 2:15 half. 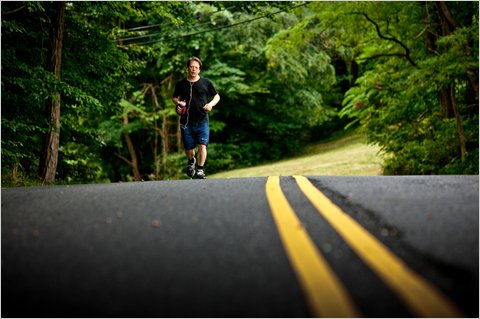 When it comes to increasing my pace, I'll keep the same strategy (i.e. aim for a negative split) but only aim to be at a 10:00/min mile by 6.6 miles and push on from there.

On Struggling To Wake Up For Morning Runs And Transforming My Short Jogs Into 8-10 Milers To Make Long Runs Easier.

How Will I Feel After Running My First Marathon? Reflecting On The Post Race Experience And Emotions

My Review Of The Great Birmingham Run 2012.

No Runs So Far This Week. Preparing My Mp3 Playlist For The Great North Run.

A Lovely 6 Mile Run On A Beautiful Sunny Morning. I Also Bought A FitBit Ultra Pedometer.

7.4 Mile Run In 76 Minutes. Takes Me Up To 50 Miles This Week. Out Of Weight Watchers ProPoints Altogether Again…

6 Mile Run In Training At A Time Of 61 Minutes – 900 Calories Burned And Another 6 Weight Watchers Activity Points.

Ran 6 Miles In Just Over An Hour And Earned 6 Weight Watchers Activity ProPoints For Jogging.

I’m Not Following A Post Marathon Reverse Taper After My Full Marathon – How Soon Will I Run Again? Whenever I Feel Like It!

My 18 Week Marathon Training Schedule Is Completed. Now To Just Finish The Belfast City Marathon In Under 5 Hours..

Running Holiday In The Sun, Tapering and Enjoying Myself A Little Too Much When I Should Have Been Marathon Training

Running On The Spring Morning Again Before I Ate Any Breakfast – Good Fat Burner Of An 8.5 Mile Run.

Should You Run A Marathon To Race And Honour ‘The Spirit’?

Ran My First Half Marathon Of 2012 In Training Today